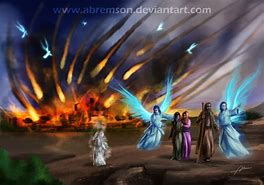 As I look around me and observe what is fast becoming accepted and deemed as ‘normal’ in society – things that society has inherently known, without question, to be wrong, deep within the core of its being – I have found myself to be so vexed in my spirit that it has caused me to want to almost become a recluse, hiding away in my house for much of the time.

I have tried to reflect upon the feelings that have crept upon me over the last couple of year and couldn’t really find a word to describe the depths of the foreboding that has descended into my soul. All I knew was that I didn’t like this feeling, which made me weep deeply within for the unrelenting decay of every aspect of society, from the highest areas of Politics, the media, entertainment and celebrity culture, right down to the daily lives of  the rest of humanity.

Then I felt the Holy Spirit whisper words to this effect;

“What you are feeling is what Lot felt over Sodom and Gomorrah. What you are feeling is a holy feeling, a righteous indignation at the wickedness and escalation of the unstoppable rise of lawlessness. I said that it would come upon the earth in the End Times…and here it is. There is no turning back. Nothing will stop this lawlessness, as its arrival was foretold by My Son Jesus Christ, as a sign that would indicate His soon return. The End is coming… Brace yourself and pray.”

So I decided that I would remind myself of what it was that Lot actually felt concerning what was going on around him. Below is the passage. It describes exactly the feeling I have, which I could not put into words myself. That feeling is the word ‘torment’.

“…God condemned the cities of Sodom and Gomorrah and turned them into heaps of ashes. He made them an example of what will happen to ungodly people.  But God also rescued Lot out of Sodom because he was a righteous man who was sick of the shameful immorality of the wicked people around him.  Yes, Lot was a righteous man who was tormented in his soul by the wickedness he saw and heard day after day.” – 2 Peter 2:7-8 NLT

Like Lot, I feel sick of the shameful immorality that has come upon the world  like a flood, parading and promoting its ‘new morality’ as a long awaited ‘freedom’, and attempting to ram its ideology down the throats of the rest of society, such as our precious children. This ‘new morality’ is FAR from ‘freedom’. The Biblical equivalent to today’s reality is the account of Sodom and Gomorrah. And what did God do to that place and all who were in it (except the righteous ones that God rescued)? God DESTROYED them. Does that sound like ‘freedom’ to you?

Anything that was once unlawful and was inherently known to be wicked and wrong, which humanity is now trying to overturn and make ‘lawful’ for the sake of political correctness and so-called ‘equality’, is a fulfilling of the following scripture.

” What sorrow for those who say that evil is good and good is evil,
that dark is light and light is dark,“ – Isaiah 5:20 NLT

Indeed what sorrow awaits those who have been deceived by the ‘spirit of delusion’ that has persuaded them that any variation of the desires of the flesh should be released and embraced, and accepted as normal and healthy. But just like the account of Sodom and Gomorrah, despite severe warnings, those engaged in these practices do not seem to care less. The more the warnings, the more intent they are on satisfying their desires.

God WILL bring His wrath and judgment upon this rapidly lawless earth, against those who refuse to believe in Him.

What concerns me the most is the rise of this unrepentant lawlessness WITHIN the Church. Let me make this absolutely clear. WE will be judged by our obedience to/or our rebellion of  THE WORD of God.

We are WITHOUT EXCUSE.

Jesus WILL return for a holy, faithful and obedient Bride.

UNLESS we repent, we will NOT be found amongst them

Michele is the author of Come on Church! Wake Up! , The End of The World  and The Gospel of Deception – Counterfeit Christianity and the Fate of Its Followers. Available WORLDWIDE as paperback and Kindle, on Amazon, Barnes & Noble, and many other online book stores.